Is the Dachshund (Miniature) right for you? 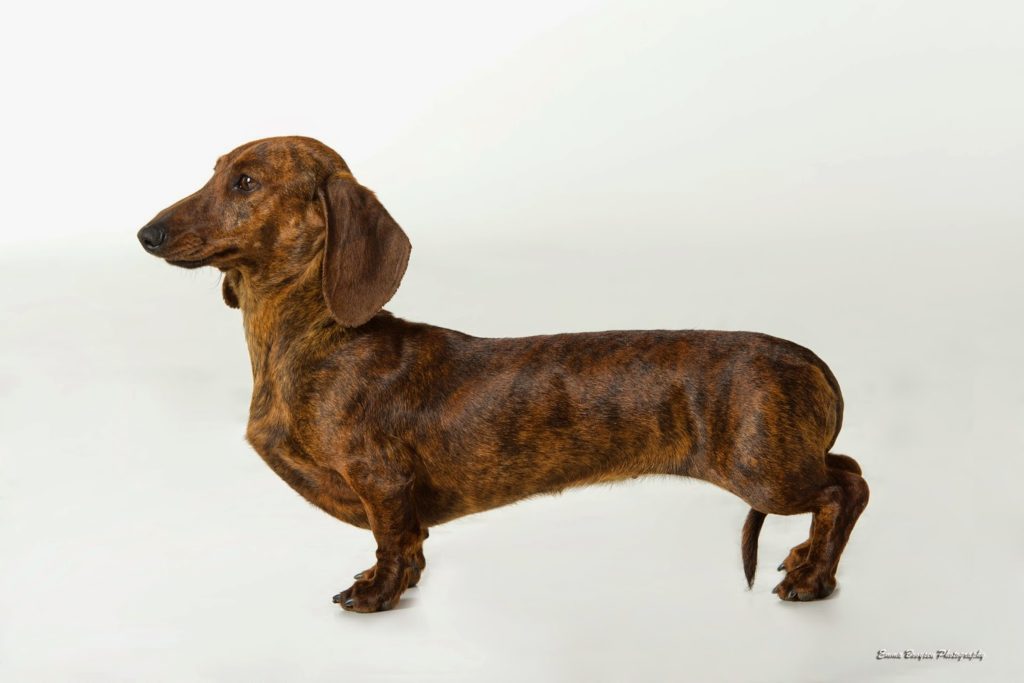 The dachshund’s long, low-slung body enables it to enter and move freely inside the confines of a den or tunnel, without sacrificing the necessary jaw and body strength to overcome its quarry. Its confidence, hunting instinct, keen nose and loud voice also are of significant aid in hunting underground. Agility, freedom of movement and endurance are necessary for the dachshund’s work, and its gait is fluid and smooth. The dachshund has an energetic, pleasant expression. Each of the three coat varieties has special attributes: The smooth is short and shining, imparting some protection against the elements; the longhair is sleek, sometimes slightly wavy, providing somewhat more protection; the wire has tight, thick and hard hair with a finer undercoat, providing maximal protection.

The dachshund is bold, curious and always up for adventure. It likes to hunt and dig, tracking by scent and going to ground after game. It is independent but will join in its family’s activities whenever given a chance. It is good with children in its own family, but some may snap at strange children. Most are reserved with strangers. Some bark. The longhaired variety may be quieter and less terrier-like; the wires may be more outgoing. Some miniatures are more prone to be timid.

Although dachshunds are active, their exercise requirements can be met with moderate walks on leash and games in the yard. The dachshund is amenable to city life or apartment living, but it is still a hunter at heart and enjoys forays into the wilds. Although it can live outdoors in warm weather, it does best when sleeping inside. The smooth coat requires minimal grooming. The long coat requires brushing or combing once or twice weekly and occasional trimming of stray hairs. The wire coat requires brushing or combing about once a week, with occasional trimming of stray hairs and stripping to remove dead hair twice a year.

Note: Obesity is a major problem for the dachshund. Many dachshunds tend to be overweight, which in turn predisposes them to intervertebral disc disease.

Definitive evidence of the dachshund as a breed isn’t found until the 16th century, when reference was made to a “low crooked-legged” dog called a little burrow dog, dacksel or badger dog. The modern name dachshund means simply badger (dachs) dog (hund) in German. These tenacious hunters would follow their quarry, enter its burrow, pull it out and kill it. The dachshund comes in three coat varieties and two sizes. The original dachshunds were smooth-coated and arose from crosses of the bracke, a miniature French pointer, with the pinscher, a vermin killer of terrier type. Some 16th-century woodcuts provide evidence of longer-haired dachshund-like dogs. It is also possible that smooth dachshunds were later crossed with spaniels and the German stoberhund (a gun dog) to produce the longhaired variety. Mention is made of wire-coated dachshunds as early as 1797, but these dogs were not carefully bred and most modern wires were created around the end of the 19th century by crossing smooth dachshunds with German wirehaired pinschers and the Dandie Dinmont terrier. Each of these varieties was best suited for hunting under slightly different terrain and climatic conditions, but all were tough, strong dogs capable of dispatching badgers, foxes and other small mammals. Before 1900, very small dachshunds were kept for going to ground after small quarry, such as rabbits. Although some were simply runts, others were intentionally produced from crosses with toy terriers or pinschers. Most of the resulting miniatures lacked dachshund type, however. By 1910, stricter criteria were adopted for type, and each coat type was crossed with different breeds to achieve the best results: Smooths were bred with the miniature pinscher, longs with the papillon and wires with the miniature schnauzer. The dachshund has since found its real niche as a family pet, steadily rising in popularity to hold a place as one of the most popular hounds in America.